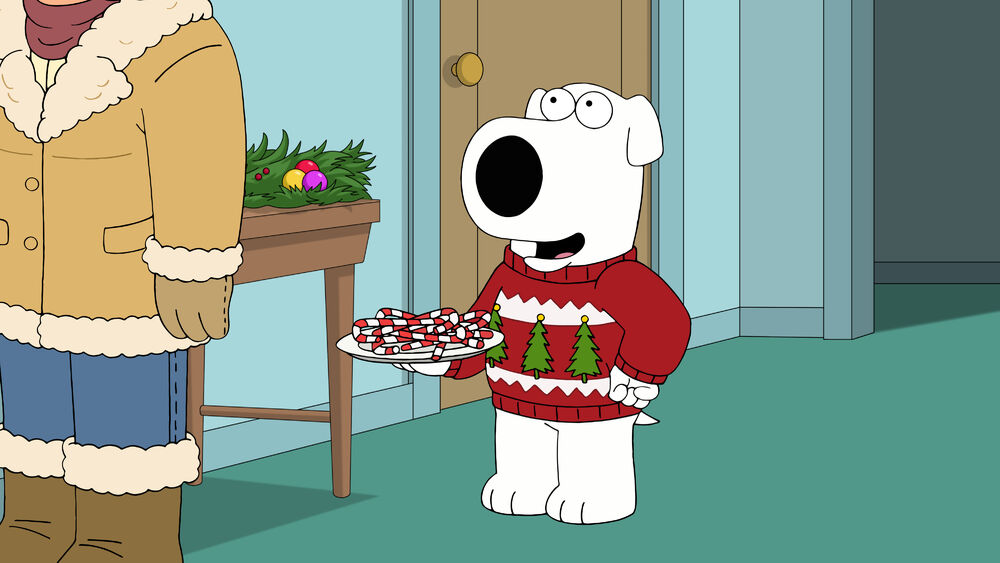 It seems like Brian will be under suspicion in Family Guy Season 20 Episode 10. Someone has ruined Mayor West’s nativity scene, and Brian is being blamed for it. Now, Mac and the family will have to save Brian from getting punished in the next episode. So, keep reading to know all the updates about the tenth episode.

The tenth episode of Family Guy Season 20 is titled “Christmas Crime.” In the upcoming episode, Brian will find himself in a spot of bother after Mayor West’s nativity scene gets ruined. He is considered the prime suspect of the vandalism caused at West’s place.

Although, the family will be celebrating Christmas when the Sherrif will pay them a visit. Brian would be taken away into custody for the demolition in Family Guy Season 20 Episode 9. And Mac and the family will have to rescue Brian by proving him innocent in the next episode.

The previous episode was set in the 1940s film noir version of Quahog in the 30s. Mac Bookpro was a Private Dick and has recently solved the mystery involving Seamus’ unfaithful wife. He was visited by Heddy Toothgraze, who wanted him to investigate her daughter, Megan’s disappearance.

Mac checked St Louis’s Cardinal and met with his report friend Red Weiner afterward. Red revealed that he heard Megan planned to meet someone at the speakeasy. The duo grilled the bartender, who revealed that the Cardinal helped aid the passing prohibition.

Thus, Mac met his cop friend Ace Hardware, who had been fired for pooping on the streets. Bogey and Bacaw almost assaulted Mac during the night and warned him to stop the investigation. Soon after, he heard that American Dad had been renewed for the third season, and Megan had been shot fatally. He also discovered a film roll around her body on the beach. So, Mac took Heddy on a date while the film roll was being developed in Family Guy Season 20 Episode 9.

Then, the Camera Guy informed Mac that both Heddy and the Cardinal were associated with the mob. Mac cornered a mob member, Karol, and forced him to reveal the Cardinal” underground alcohol business details, with supply coming from Europe. Mac showed up at the church to confront the Cardinal, who was murdered during the confession. Then Hardware revealed that the bullet found in Megan’s body belonged to mac’s gun. He was being framed and sent to jail. Eventually, Red bailed Mac out as he pursued Heddy to find the answers.

The Killer Turns Out To Be Mac’s Orphan Assistant

Heddy revealed that she was skipping town because her life was in danger. She also revealed that she was not associated with the Cardinal or the mob. The truth was that the Cardinal was Megan’s father. Mac then noticed a familiar face in the orphan’s pictures. Mac’s secretary Fanny Patbottom was an orphan named Marion. And Megan and other nuns were cruel to the orphan while the Cardinal was busy with his alcohol business. So, he killed Megan with Mac’s gun and also took care of the Cardinal. Eventually, Seamus showed up and knocked Marion while Hardware arrested him in Family Guy Season 20 Episode 9.

Where To Stream the upcoming Episode Online?

Fans can stream the latest episode on Disney+, Amazon Prime Video, Hulu, and YouTube TV if you miss Fox’s broadcast. So. don’t skip the next episode and keep returning for more thrilling episode previews about your favorite TV shows.